Angular vs React - How to choose one?

|In Technology
|By Mitesh Pardeshi

Angular is a TypeScript-based Javascript framework. Developed and maintained by Google. It’s a complete MVC framework. As we know there are three versions of the Angular present in the market, AngularJs released in 2010 is on the edge of retirement or retired, and its two present successors Angular 2 released in 2016 and Angular 4 released in 2017. Big names using Angular are Google, Wix, weather.com, healthcare.gov, and Forbes. 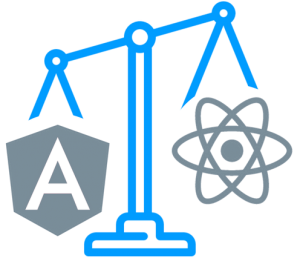 Angular 2/4  uses TypeScript which is a superset of the JavaScript that evolved as an alternative to pure JavaScript, which gives developers the tool to help them write faster, cleaner JavaScript code. TypeScript, backward-compatible version of JavaScript that compiles to pure JavaScript but makes writing that foundation easier working with the TypeScript keep your code much cleaner, like in Angular you have a different file for your template and a different file for your script which makes your code much good looking. What makes Typescript and Angular easy to learn is features like CLASSES, INTERFACES, GENERICS & DOM MANIPULATION.

React uses JSX which is JavaScript syntax extension. It not necessary to use JSX in React development, but recommended. React breaks long-standing best practices. For decades, developers trying to separate UI templates and inline Javascript logic. But with JSX intermixed both. JSX an optional preprocessor for HTML-like syntax compiled in Javascript later. The big advantage of JSX is you have everything in one place.

Angular is a framework rather than a library because it provides strong opinions as to how your application should be structured and also has more functionality out of the box. Angular is a complete one solution and has long list of libraries & routing solutions,

In terms of Learning if you have a background of OOPs and like more to play with object and function. Then Angular is the Great choice to go ahead with.

With React, on the other hand, it’s universally flexible has libraries can be paired with all kinds of packages there are quite a lot for React on npm. With React, you can even exchange the library itself for API-compatible,

In terms of Learning if you have more affection towards Scripting and JavaScript. So in that way React is the best.

That’s it, Thanks, Hope this would help in making up your mind between Angular/React.