|In Android, Technology
|By Yash Patel

Android and IOS, world’s two most popular operating systems among users, with Android leading the chase. Almost two third of the phones in the world are run by Android and nearly rest by IOS. While Windows currently holds between 1 and 2.5 percent phones, so your most suitable choice while buying the phone will be either Android or IOS. The latest operating systems released by their makers are IOS 10 and Android Nougat.

Android is changing and spreading every year, that explains why new nougat is found in 4.9 percent Android phones. On the other hand old Marshmallow has been dropped to 31.2 percent phones and tablets.

Things are no different for IOS, currently, IOS 10 is running on almost 80 percent of Apple phones. On the other hand IOS 9, the previous version can only be found in 16 percent iPhones and IPads. Google released Nougat in the middle of August last year and Apple IOS 10 was released later the same year in September. Since then both operating systems are going head to head to dominate mobile industry.

Apple’s current figures are still not on the mark, they may have changed a little bit in favor of IOS 10 since the last survey in February. Google on the other hand post figures at the start of every month so the picture is clear on the success of Android.

4.9 percent of people using Nougat is a combined figure of 7.0 and 7.1 versions. Most of the nougat devices are running Android 7.0 while only a small number is running Android 7.1. It is also expected that Android nougat is going to get a boost in coming months when LG and Samsung will release their latest flagships. 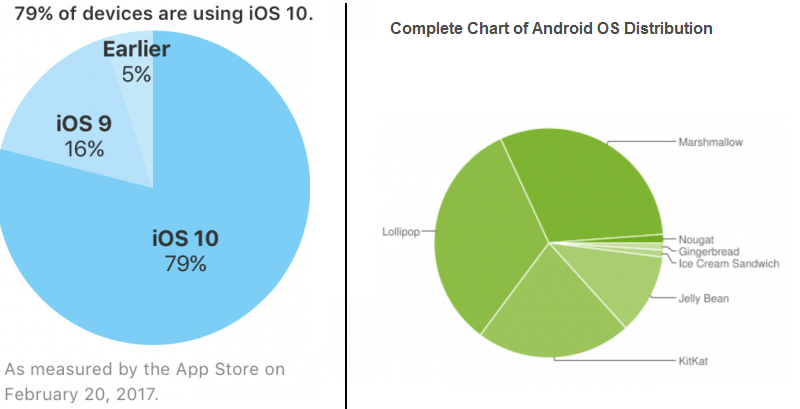 Furthermore, the above image explains the distribution of Android and IOS operating systems in 2017. As you can see earlier IOS versions are used by only 5 percent users, IOS 9 is used by 16 percent, and 79 percent of users have the latest IOS 10 installed. On the other hand, Android Lollipop, Marshmallow, KitKat, and Nougat have a higher share of phones. It has not been much longer since IOS 10 and nougat came into the market, but they have gained great respect from users. Let’s explore what features both these operating systems have that make them unique.

IOS10 and Android Nougat had a major polish in looks after launch. The fundamental principles of the home screen in Android and lack of home screen in IOS are evident, but still, there is a finesse in both versions.

IOS10 main focus is on interaction using force touch, Apple has introduced sensors in the display to judge the amount of pressure applied. In addition, to force touch, Apple is also introducing “rise to wake” which is the same as “always on” feature in Android. Apple has changed some features, introducing widgets for lock screen and notification. Another major change is support for third-party applications and dedicated widgets.

On the other hand, Android Nougat has new navigation button including “quick switch” that can be accessed by tapping the recent button twice to move to the last app you were using. Nougat doesn’t have anything new in the content department but users can look forward to a good experience.

WhatsApp has been dominating messaging along with snapchat and Facebook messenger right now. Apple and Google don’t seem to be happy about it and it shows in their new products.

Apple is developing iMessage in IOS10 and it has those big rivals in consideration. You can plaster your messages with animations, icons, emoji, and you can also add handwritten messages in Apple messenger. Interestingly, iMessage has scope to add its own third party apps. This can help you to share a range of content with your contacts.

Android is also following the lead and adding its own sensitive screen systems in the new Android nougat. The latest development by Android contains evidence that looks like IOS 10 shortcut icons which can be accessed via the simple press.

Notifications are an important part of user interface and they have been integrated perfectly in IOS and Android. Both Apple and Android have reviewed their approach towards notifications.

In Apple’s latest OS, there is a great concentration on 3D touch, which helps you expand notifications and enhance response and actions. The notification section is like a simplified alone menu and things aren’t confusing as they were before.

Android Nougat notifications, on the other hand, take more of the screen, fonts are new and provide much flexibility. The notification menu is helpful in accessing your favorite toggles without needing double swipe as marshmallow does. Google has added stock notification feature so you can bundle them together, which is already present in IOS.

Apple’s artificial intelligence, Siri will be updated soon so users can send messages, book cabs, online search, set alarms, notifications, schedules, and make calls flexibly. As per news, Siri is going to be available to third-party developers, which means it is expected to grow more.

Even though Google has AI assistance but it is not up to the mark yet. You can process various commands but it is still improving bit by bit, and we can expect more features adding in near future. Thanks to Google’s algorithm, android assistance has been better than Siri, it may take over Google as best personal assistance.

By comparison, Apple doesn’t give you the option to change icons and control OS. There is even option to change back to an IOS9 style where you have everything available in one tab. One more frustrating thing about IOS10 is that you don’t know which Wi-Fi you are connected with unless you open setting and move to Wi-Fi. On the other hand, android shows you which network you are connected within tiny fonts below the icon.

There is a chance for Apple photo to catch up to Google photos, looking at IOS10 photo features possibilities are high. Apple is improving IOS10 Photos and we can see from where it gained the inspiration.

IOS Photos will automatically group together and compose slideshows, same as Google Photos but better. Apple was on the verge of introducing something like this and looks like now Google will be on the losing end in future. Initially if we look at IOS10, Apple photos require more development to fully kick out Google photos, there is still time and hopefully, we will see big changes.

You won’t find unknown sources in IOS, there is an official app store particular to your country. There are benefits to this restriction, you won’t install a malware app mistakenly. This makes apple more on the quality side, but there may be badly designed apps but malware is unheard of.

iPhones and IPads are secure, without passcode it is nearly impossible to get information from devices. It is a serious crime if anyone exposes the OS and unlocks phones or get data out somehow.

On the other hand, it is possible to encrypt Android, but nougat is completely different from Marshmallow’s file based encryption. This is good but if you are switching from Marshmallow to new Nougat then some of your data may be wiped, which means you may have to reinstall your applications.

In many aspects, IOS and Android are kinds of similar operating systems. They are refined, slick, and competent, they have their advantages and disadvantages. There is not a set winner between both because they keep evolving and coming up with outstanding features.

If you like variety and customization then you should go for Android. There is a huge price range between both the operating systems, but you will get what you pay for. There are some key areas where Apple has to catch up such as more user friendliness and Android also has to work on security. AI can be the next big thing for both operating systems and it is likely that AI will decide who gets to lead.